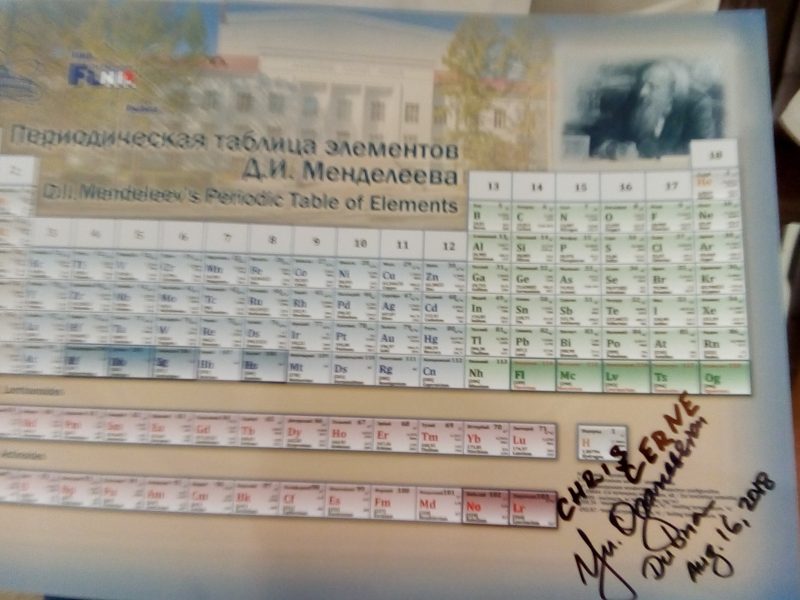 You are one of the best nuclear physicists in the world
– Not at all. There are so many nuclear physicists better than me.
When did you become enthusiastic about nuclear physics and why?
– It was an accidental choice, as often happens in his youth.
Even though I have read your discovery report I still do not understand how the synthesis of new elements is going on.
– Do not despair. In order to understand this, one must be an expert in this field.
Could you explain me the procedure in a simpler way?
– A new element is formed in the fusion of two lighter nuclei. For example: 114 elements were obtained in the fusion of plutonium nuclei (atomic number Z = 94) and calcium (atomic number Z = 20).
Do you think that we can expect some further research in this field or do you believe that the all research is finished with the synthesis of the “last element” of Og?
– Of course, on an element with Z = 94 the Mendeleev table does not end. Our next attempts will be related to the synthesis of elements 119 and 120.
Do you think that Og is really the last element in the Periodic table?
In the Periodic Table of Elements, Og ​​lies in VIII group – in the group of noble gases. Considering the fact that its lifetime is very short – only 1. 3ms, is that true? – how can we define its properties?
– The half-life of the element 118 isotope 118 with a mass of 294 is about 0.7 ms
Does it have anything in common with noble gases?
– This will have to be clarified with a longer-lived isotope of this element
People are synthesizing new elements, all of them have a very short lifetime – existing for less than a second. Ordinary people. What are these elements used for and what is the main purpose of synthesizing them?
– A new element at the end of the Mendeleyev Table was produced in the amount of 1 atom per day! On the use of their is meaningless. But they carry information about the structure of the nucleus and the limits of existence of the material world.
When surfing the Internet I came across the information that a lot of new elements, including elements with atomic numbers 113, 115, 117 and 118, were synthesized in the Institute for Nuclear Researches in Dubna. How many discoveries did you participate in and what was your role in them?
– I have proposed a method for their synthesis and have been the scientific supervisor of experimental research for more than 25 years, which is conducting an international collaboration on the synthesis of these elements in Dubna
To conclude, I would like to ask you just one more thing. In your opinion what has been the most significant discovery made in physics or chemistry so far? And why?
– I have been doing research all my life. For me your question sounds like, what was the most impressive in your life? I do not know. Maybe the most impressive thing has not come yet!
Actually, I asked you everything I wanted to; however, what is the message you would like to deliver to young scientists?
– A person who chooses life in science has to remember how uneasy this profession is and will be – sweat, blood and tears – which most likely never brings full satisfaction, although, requires full devotion.